What’s the difference between fantasy and madness?

That’s the larger question broached by the (perhaps serendipitous) pairing of one-man shows at the New Hazlett Theater, which explore the musings of Edgar Allen Poe in his last hours, on the one hand, and the ravings of the paranoid-schizophrenic subject of Gogol’s short story “Diary of a Madman,” on the other. 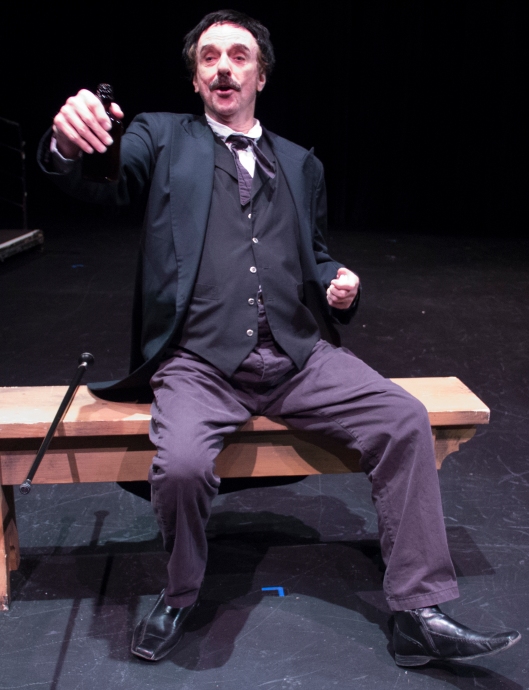 The evening begins with David Crawford’s Poe’s Last Night, in which Crawford portrays the poet as he attempts to escape from three mysterious assailants on what appears to be his last night of existence. Are these three men real, or just figments of his imagination? Crawford never answers the question, preferring instead to remain in the same realm of mystery in which Poe often dwelled as a storyteller and poet. Crawford’s absorbing monologue interweaves stories from Poe’s autobiography with excerpts from his poetry and prose, including “Annabel Lee,” “The Raven,” and – the evening at its most chilling – “The Cask of Amontillado.”

Crawford’s embodiment of Poe is quietly compelling, and his interpretations of Poe’s works are spellbinding – his rendition of “The Raven” may be one of the most spine-tingling I’ve ever heard. He reels his audience slowly into the heart of Poe’s anguish, and offers thought-provoking insight into the personal conflicts and resentments that may have provided the fuel for Poe’s stories of revenge and dread.

With Diary of a Madman, the eighty-minute piece that follows, Jon Hayden presents an oddly fitting parable for our present day. Poprishchin, the “hero” of Gogol’s story, is a frustrated lowly civil servant whose resentment of the myriad ways the system is rigged against him drives him to madness; he first begins to imagine that he can hear dogs converse and eventually fantasizes that he is the unrecognized King of Spain. Gaseous whiffs of current-day Trumpkinism bubble up, not only in the functionary’s seething anger toward the status quo, but also in the now-too-familiar passive-voice rhetorical manner by way of which he conjures “fact” out of thin air: “it is said that in England a fish put its head out of water and said a word or two in such an extraordinary language that learned men have been puzzling over them for three years, and have not succeeded in interpreting them yet. I also read in the paper of two cows who entered a shop and asked for a pound of tea.”

Hayden presents his protagonist’s descent into madness with energy and (pardon the pun) commitment. His is the more fully produced of the two monologues, and while the set offers a useful grounding in the world of the play, upstage banners that display the diary in full are a choice that ought to be reconsidered. Although the text itself is too distant to be read, the dates and relative lengths of each diary entry are easily legible, and it’s hard to resist looking ahead and thinking about how much distance there is to the end, instead of remaining immersed in the present moment of the action. Director Prodan Dimov may well have made this choice deliberately, to provoke temporal dissonance in his viewers as a way of mirroring his subject’s psychological breakdown, but I fear the real effect produced by this scenic choice is more like impatience than insanity. Given the genius of Gogol’s text, that’s a regrettable effect.