A moment of inattention – that’s all it has taken to catapult Libby (Amy Landis) and Anton (Ken Bolden) into the circumstances of Lydia Stryk’s 2010 play An Accident. Libby now lies paralyzed and comatose in a hospital bed; Anton keeps vigil, guilt-ridden and self-hating, by her side. When she finally wakes, the play traces the long, slow process of their mutual healing and reconciliation to the vagaries of existence. 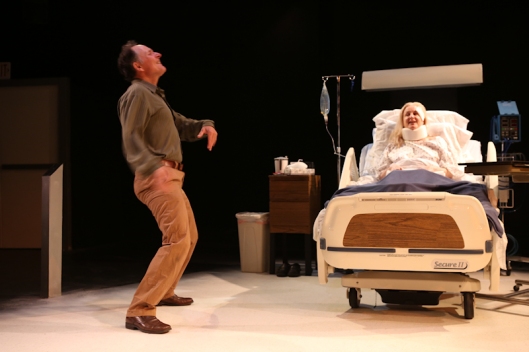 Ken Bolden and Amy Landis in AN ACCIDENT. Photo courtesy Off the Wall Productions.

There are a number of well-worn paths Stryk might have explored from this premise. For example, this could have been a play about characters finding spiritual solace or religious redemption; or a play about the legal wrangling that ensues over who is at fault for the accident; or a play about a woman waging an underdog fight against the corporate insurance industry. Instead, and thankfully, Stryk offers a more original exploration of the agony of recovery – both physical and psychological – from an unexpected and life-changing event. Based partly on her own experience recovering from a hit-and-run accident, Stryk’s play allows her to come to terms with her own emotional journey as well as stage a fictional confrontation with the person who hit her.

An Accident is a quiet and intense play, one that provokes discomfort more by dint of its focus on things we’d all rather not think too hard about (how awful would it be to suddenly have your life hijacked by an accident?) than by showy dramatic conflict. Landis makes Libby’s mental anguish and corporeal pain palpable, but she doesn’t indulge in a pity party – her dry and sardonic tone keeps the character appealing, and her emotional journey as she copes with what the accident has robbed her of rings genuine and authentic. Bolden’s Anton seems to suffer in some ways even more than Libby; his life, too, is irretrievably altered when he accidentally runs her over, and his sense of helplessness and despair at having been the source of such grievous harm is heartbreaking to witness and easy to commiserate with.

Director Linda Haston paces the eighty-minute play beautifully; while we don’t know for certain how much real time the action covers, it’s clear that the evolution of both Libby’s ability to function and Libby and Anton’s relationship are excruciatingly slow, painful, and rocky. The passage of time is indicated by the periodic arrival of a nurse (Hilary Caldwell), whose murmured ministrations seem aimed not only to give support to Libby, the character, but also to Landis, who must remain immobilized throughout a good portion of the action.

By play’s end, Libby is finally able to walk away, released from the suspension of time, and life, that her accident has precipitated; but it’s clear that neither she nor Anton will ever find full escape from what a split second of distraction has done to them both.