Gesher Theatre’s extraordinary In the Tunnel  juxtaposes two narratives centered on the never-ending Israeli-Palestinian conflict. Below is the concrete-dun, claustrophobic, dimly lit tunnel in which a pair of Israeli reserve soldiers encounter a pair of Hamas fighters; the resulting skirmish leaves one of the Palestinians dead and the other three fighters trapped together in a stalemate. Above (literally, on the two-level set) is the bright, expansive, technicolor world of television pundits and slippery politicians spinning the event for commercial and political gain. Below, the tension between the Israelis and the surviving Palestinian starts at a rolling boil and gradually cools to a simmer as the three men start to talk, trade histories, and even break bread together, while bombs from both sides threaten to bury them alive. Meanwhile, above, leaders from Israel and Hamas engage in a cynical circus of finger-pointing, zero-sum-gaming, and verbal bomb-throwing, while a hapless German UN official attempts to broker a cease-fire that will allow both sides to retrieve their trapped soldiers. Below, the trajectory of the drama progresses from two dimensions to three, as circumstances force enemies who have pigeonholed each other as barbarians and terrorists to inch toward recognizing each other’s humanity. Above, meanwhile, the characters farcically devolve from two dimensions to one, as they become caricatures of attention-seeking talking heads and vote-hungry politicians.

The aesthetic and stylistic contrast between these two worlds adds up to a sarcastic and biting theatricalization of the absurd Manicheanism that propels Israeli-Palistinian hostilities: what’s happening above would seem absurd to those below, and vice versa. Yet with the choice to give dimensionality to the three men below, the play also puts its finger on the scale: we come to really care about Iftach (Miki Leon), the older of the two Israeli soldiers, whose daughter is about to celebrate her Bat Mitzvah, Tzlil (Ido Mosseri), the inexperienced and frightened younger soldier, and Hisam (Firas Nassar), who speaks Hebrew because he fell in love with an Israeli woman, and who fights for Hamas because his brother was killed by Israeli bombs. The cardboard cutouts above, in contrast, are the targets of easy mockery, particularly the intransigent politicians from Israel and Hamas (Assaf Pariente and Alexander Senderovich) and the ineffectual UN envoy (Ori Yaniv).

The dual structure of In the Tunnel allows it to be simultaneously hopeful and deeply cynical, which is an admirably tricky thing to pull off. There are even two possible endings – audience members are asked to vote before the show begins whether or not they’d like the play to end with a light at the end of the tunnel (“Dream!”) or not (“Wake Up!”) The night we saw it, apparently we were in a collective mood for light, and the play ended with a glimmer of hope – for the three trapped men, at least, if not for a full resolution to the bigger conflict that raged around them.

The five young performers of the Ukrainian Teatr-Pralnia (“Laundry Theatre”) channel the innocence of childhood to ask trenchant questions of the political and economic status quo. TseSho/What’s That? is billed as a “puppet cabaret,” but really it’s more a concert performance of music that feels like a marriage of Eastern European folk songs with a dance club beat. Musically, it’s fresh and unusual: the instruments are acoustic – a bass (the kind you see in a symphony, not the rock band kind), a cello, an accordian, a saxophone, a melodica, and a drum set – and the performers weave a complex, high-energy, and at times whimsical texture that includes lyrics often at odds with the mood of the song. For example, their opening number, in which they impart grim news ripped from the day’s headlines (“Hurricane Michael kills 16 people”), has a boppy rhythm and cheerful, upbeat melody, sung as they rock back and forth and point their fingers staccato-like in the air.

Teatr-Pralnia, cast of “What’s That?”

The performers sing with an impish and deadpan quality that is amplified by costumes that give them a naive, “Where’s Waldo” vibe (all five wear round black glasses and a wool hat with a little pompom on top). The promised puppetry comes in the form of little dolls, dressed identically to the performers, that the musicians animate on occasion to illustrate a song or to foreground the childlike perspective under exploration. The dolls play a relatively minimal role, although one of the most potent stage images of the evening comes when the five dolls “hide” under a bench while the musicians sing of the impact of war. The performance is augmented by moody concert lighting and an arresting media design of ever-shifting images and graphics that both animate the space and provide a counter-narrative to the songs.

I found it challenging to grasp a “whole” from the performance, but I came away with admiration for the skill and finesse of both the individual performers and the production as a whole; in particular, the diminutive Marichka Shtyrbulova has a voice like nothing I’ve ever heard, ranging from a Portuguese fado-like quality to a clear operatic soprano, with a diversity of vocal styles in between. 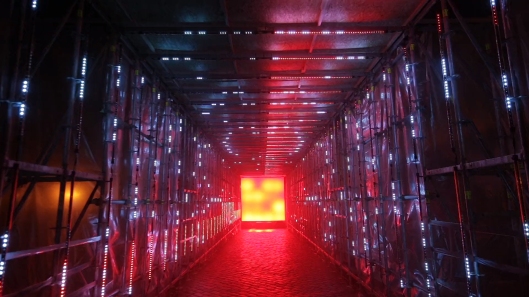 After the show, we stopped again to take in Beyond/Playmodes, which I enjoyed even more the second time than the first. At 9:30 on Saturday night it was nearly empty, which is criminal – people, where are you? Get yourself downtown between 7 and 10 Thursday through Sunday and catch this light and sound show before it’s gone – it’s free, for goodness sake – and while you’re down there, head over to Tago (the Korean drum performance); Flying Girls (an art installation at the August Wilson Center); Mrs. Krishnan’s Party (an immersive theater performance from India); Karoo Moose – No Fathers (theater from South Africa); Cris des Nago (dance from Haiti); or the new Bricolage Midnight Radio production of Frankenstein in combination with Karate Man Patrick Kim from Tel Aviv.