I have a suspicion that a few of my loyal readers share my (very negative) feelings about Brown Marmorated Stink Bugs.  So they may find this image heartening: 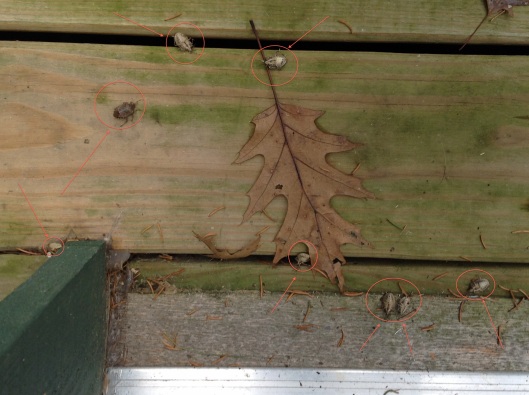 Seems the below zero temps last week may have been too much for our prehistoric friends.  This is the scene that greeted me this morning after yesterday’s rain melted all the snow.

I think they are really dead.  They haven’t moved all day, and many are belly-up.  Nudging them hasn’t provoked any movement, either.  But as we know from previous experiments, these monsters seem to be able to go into some wierd death-state hibernation and then revive, so…I’ll keep checking on them and let yinz know if they come back to life.

In the meantime…I’m feeling hopeful that, as nasty as that cold front was, it actually did us some good!

My readers will indulge me a brief interruption of my theatre reviewing to update them on a horrific new discovery about brown marmorated stink bugs.

This past Monday, Labor Day, I was laboring in my garden, weeding, harvesting, cleaning up, etc., when by chance I overturned one of the bazillion leaves in our thriving bean patch and discovered a strange bundle of just-hatched insect eggs.  I had my suspicions about what they were, and a quick internets search confirmed my fears:  they were newly hatched nymphs of the dreaded stink bug.  I didn’t take a photo at the time, but they looked EXACTLY like this: 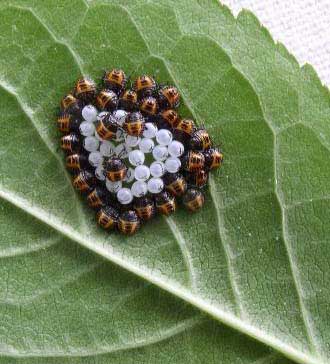 I sealed the leaf in a ziploc bag to show to the rest of the household and then forgot about it.  It sat outside in the very hot sun (we’ve had 86 plus degree weather this past week) and I didn’t think too much about it.  Today, five days later, I was out in the garden picking tomatoes…

…yeah, that’s about 10 pounds of tomatoes there…anyway, I happened to notice that the ziploc had blown onto the deck, I picked it up, and lo and behold!  THEY’RE STILL ALIVE!!!  (I couldn’t get a good video with our lousy little camera, so you’ll just have to take my word for it).

So, not only are they creepy, stinky, and destructive…but they’re also practically immortal.

Just when you thought it was safe to leave the windows open to get that cool late summer breeze at night, right?  You know what I’m talking about.

Found three in the house last night, one buzzing me just as I was falling asleep. I won’t say there’s nothing worse, but the BMSB rises to the top of my list of hates right now.

If all we get this year is two or three a day in the house, though, I can live with that.

Okay, this has nothing to do with Pittsburgh theatre, arts, culture or the life academic, but it has everything to do with living in Pittsburgh right now. We’re all dealing with the stink bug invasion, some of us more than others.   These prehistoric crawlers (and they don’t just crawl–when they’re feeling feisty they buzz all over the room and usually like to land right on your computer screen or (worse) your face!) migrate into homes in late summer as the weather cools to “hibernate,” but then, instead of staying asleep and put, they spend the winter creeping out onto your toothbrush or pillow.  If you crush them, they stink (something like cilantro plus moth balls plus rottenness).  They are nasty.  And in the spring, they emerge with the warmth to go outside, eat and frolic among the vegetation (causing massive agricultural damage, apparently), and make lots of baby stinkbugs.

Because we were caught with the housing equivalent of our “pants down” last fall (the siding on our new addition was not yet up, and we had openings galore in our attic) we got invaded by these puppies.  We were finding a few in the house all winter long, crawling on walls or ceilings–each sighting had a minor shock value, but in winter they are dopey and slow and pretty easy to deal with (grab with tissue, squeeze, flush).  We had a feeling that the population we were finding in the house was a minute subset of a much larger population in the attic; this intuition was confirmed in early Spring (sometime in March) when I went up into the attic with a shop vac full of soapy water and vacuumed up a couple hundred in one day (I was finding them under and in boxes, under cushions, behind junk…it was an education in stink bug hiding places).  However, we had no idea how many we might possibly have in the attic.

Since mid-April, I have either vacuumed or trapped (in a homemade trap we invented that is going to make us millionaires if we can figure out how to maximize its effectiveness and turn it into something that can be packaged and marketed) between 50 and 200 stinkbugs a day.  Let’s average that to 100 per day, just for ease of calculation, for the last, let’s call it, 40 days.  We’re talking in the range of 4000 stinkbugs we’ve eliminated from our 500 sf attic.  Minimum.  I’m guessing we might have had almost double that (many seem to have died on their own).

It was bad.  There were warm days when they literally covered the interiors of the windows in our attic, flitting and buzzing and stinking up a storm. They got smarter and faster with the warm weather–they tried to escape from the vacuum hose and even divebombed my head on occasion.  And some of them left behind a brown stain that probably serves as a scented calling card to other stinkbugs.

I’m calling that terrorism, and there’s nothing you can say to make me back off that assessment.

But I think we have seen the light at the end of the tunnel.  For the last three days, we have found only one or two in the attic each day, and have trapped none at night (the traps were consistently getting 40-50 per night).  Is the nightmare over?  I fear it may be hubris to claim, as the other “W” did, “Mission Accomplished!”  Extensive internet research tells me that Brown Marmorated Stink Bugs do not reproduce in the house, only outside; but what if we’ve hit the moment in the season when they suddenly get the urge to reproduce–could they have retreated into our walls to create the next generation of stink bugs to terrorize us next year?  We are now sided and tightly sealed against the invasion this coming fall (thanks to multiple cases of insulating foam and caulk–shoulda bought stock in those companies!), so if we have eliminated the interior population (knock wood) we might have won this war on terror.  But if they’re breeding in the walls….

…well, I think I’ve got a premise for a good horror film screenplay.

And what about ‘yinz’?  Been in your attic lately?