Pardon me while I gush.

There’s a lot to love about director Tomé Cousin’s richly realized production of Tarell Alvin McCraney’s 2008 play Wig Out!, which centers on love and conflict among drag queens in New York. If you’ve seen the film Paris Is Burning (a poster of which figures prominently in the set) you know something about the “House Ball” culture that developed within the African-American and Latin-American trans community in the late eighties. Almost thirty years later, that scene is still going strong, and Wig Out! brings us into that world with charm, humor, and extravagant flamboyance. 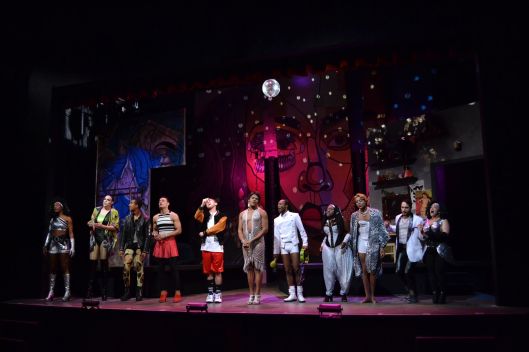 McCraney’s story focuses on tensions within The House of Light, a family composed of house mother Rey-Rey (the convincingly matriarchal Jordan Phillips), father Lucian (Jerreme Rodriguez), daughters Ms. Nina (Justin Lonesome) and Venus (Freddy Miyares) and son Deity (LaTrea Rembert). An invitation to a “Cinderella Ball” from Serena (Connor McCanlus, delightfully weird), mother of the rival House of Di’Abolique, threatens the stability of the family, as the domineering Lucian seeks to undermine Rey-Rey’s power within the House. Complicating matters further, Ms. Nina is distracted by a new love interest, Eric (Jordon Bolden), whose relationship to trans culture is ambivalent at best, and somewhat phobic at worst. 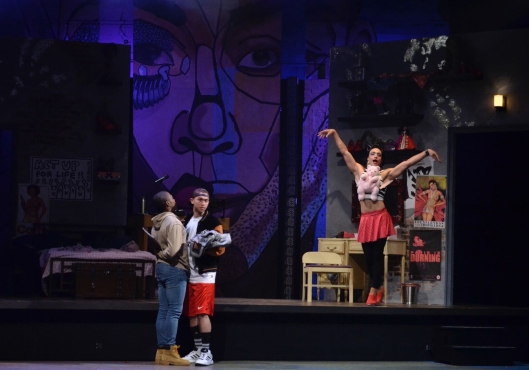 The play is very funny and raunchy, in places outrageously so. It’s also gorgeously theatrical, made so primarily by the framing device of “The Fates Three,” played by the massively talented trio of Krista Antonacci, Arica Jackson, and Amber Jones. These three vocal powerhouses serve as chorus-with-attitude, providing both spoken and sung commentary on the action and elevating the story into a mythic realm. They sing mostly a cappella, and the effect is downright stunning, especially when their clear, pure voices contrast with the recorded house music that accompanies the show’s dance numbers (the excellent sound design & musical arrangements are by Steve Shapiro; Jane Howell is the musical director).

Costumes, by Robert C.T. Steele, are fabulous in ways that defy description. This is a play about drag queens, after all, and Steele gives these girls the wigs and robes and heels they need to strut their stuff. Steele particularly outdoes himself in the play’s two big dance-production numbers, a dream sequence in the first act in which McCanlus plays some kind of strange, hermaphroditic Japanese figure, and the big competitive vogue number of the second act, which features, among other eye-popping outfits, a Tina Turner-esque ensemble for Ms. Nina, and crazy glow-in-the-dark wigs and green laser gloves for Serena and her dance partner Loki (Jared Smith). 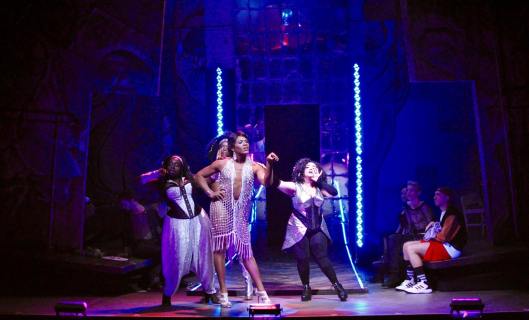 Cousin’s sharply observed choreography takes the show to additional heights, and the cast brings athleticism and precision to the dance numbers. Rembert & Rodriguez have memorably agile solo turns in the first act, and in the second Freddy Miyares – who is acidly delightful as the attitude-ful Nuyorican Venus – busts out some jaw-droppingly limber hip-hop moves in the “real boy” category, and then does a mean Marilyn Monroe impression a few minutes later to boot.

Scenic and lighting design by Britton Mauk and Andrew Ostrowski add to the play’s raucous energy: the set is visually chaotic, in a way that’s just right for this production, with an upstage wall dominated by an image of a face that blends together masculine and feminine features. Ostrowski’s lights pop and pulse with the music, and a disco ball hovering over the action allows him to transform the space into a big ole’ house party in the blink of an eye.

As fun as this play is, it’s got some serious messages at its heart. Indulge me here for a moment. While the conflict at the heart of the play doesn’t seem very momentous from an objective point of view – when it comes to it, we’re talking about dominance in a dance competition – within the world of the play, the stakes couldn’t be higher. Oversized emotions predominate, and that’s as it should be, for aside from Eric, every character in the play is already putting on a persona, acting out what is inside to a more or less ostentatious degree. Their showiness is both an exemplification of the performative nature of gender, and a destabilization of the idea that identity itself is something fixed and immutable. When Ms. Nina morphs into Wilson (her given name) to please Eric, she becomes a different person (as does Venus, when she dances in the Ball as a “real boy”). Lonesome’s portrayal of Ms. Nina is subtle and acute – he fleshes out the person behind the stereotype, and offers a dimensioned character who defies easy categorization. Rodriguez does the opposite with the character of Lucian, whose embodiment of Puerto Rican machismo embraces stereotype to the point of parody. His masculinity is just as much a drag performance as Ms. Nina’s and Venus’s and Rey-Rey’s, and together all these performances of identity expose the extent to which what we think of as “real men” and “real women” are largely social fictions.

The play shrewdly refuses to position any of these personas as either “real” or an “act,” because, as Eric (who claims he “likes men”) quickly learns, that old-fashioned binary thinking just doesn’t apply. Jordon Bolden’s understated portrayal of (the at times rather confused) Eric (in a certain way, he’s the “straight man” in the play) offers audience members who may not yet be comfortable with so much ambiguity a way “in” to the play’s world. And like Eric, once they’re in, they may find its seductive, glitzy pull impossible to resist.

1 thought on ““Wig Out!” at The REP (Pittsburgh Playhouse)”