In one of the vignettes in Corning Works’ new dance theater piece six a breast, dancer Sally Rousse twists and contorts her arms and legs on and around a trapeze-like swing hanging low to the ground. “Sorry!” she occasionally blurts out, in a vaguely familiar, business-like tone. Twist, contort, swing, “Sorry!” What is it that is so familiar about this scenario? And then, with her last “Sorry!”, the penny drops: she mashes the clear plexiglass seat of the swing against her breast, and the connection between her tortured contortions and the awkward discomfort of the annual mammogram (in which, my dear young and/or non-female readers, the boobies get squeezed between two plexiglass plates, often accompanied by brisk, unconvincing apologies from the tech whose job it is to make that squeeze as tight as possible) pings into place.

Leave it to dancer/choreographer Beth Corning to find such an off-kilter way to capture the indignities not just of a medical diagnostic ritual, but also a host of other (mostly mundane) tortures and torments women find themselves subject to. Makeup, domestic chores, body and skin care routines, and social expectations that women be nice, nurturing, and perpetually sublimate their rage – all these and more are grist for Corning’s dance mill, which takes the absurd and turns it into a series of sublime meditations on gender roles.

In addition to the exquisitely elegant Rousse, Corning is also joined on stage by collaborator Laurie Van Wieren. The three performers bring personality and idiosyncracy to the piece, like a female set of Marx Brothers or Stooges. Corning is the smart-ass clown; Van Wieren plays the befuddled, clumsy member of the trio; while Rousse is the dignified “straight man.” Some Corning performances are more theater than dance; not this one. Rousse’s virtuosity in ballet is on full display, and in places – particularly, in a vignette that might be subtitled “spinning her wheels,” – the beauty of her line and posture is breathtaking. 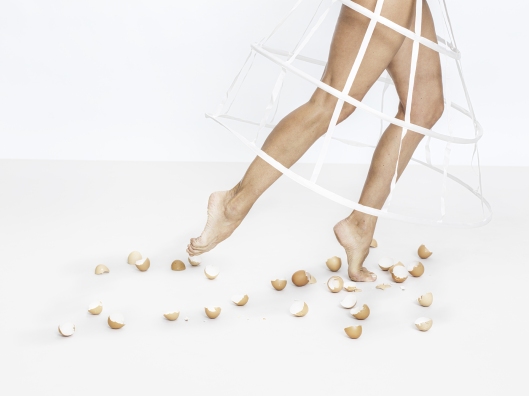 The evening is structured as a series of skits or circus acts, some solo, and some featuring two or three performers. Each skit captures facets of the female experience with wit and irony, sometimes in ways it’s difficult to put your finger on. For example, in one, Rousse traverses the stage with a basket full of eggshells; she tosses them on the floor in front of her and walks tiptoe on them. The metaphor here is clearly “walking on eggshells,” yet her mood is not one of anxiety, but pleasure, and when Corning – cleaning up behind her – steps on one of the shells herself, there’s a sense of wicked pleasure in the act. The image conveys something complicated about our relationship to these absurdities – perhaps that we’re so comfortable with what’s expected of us that we begin to fail to see how absurd the situation is.

Cleaning is a running theme throughout the performance – Corning materializes a wad of paper towels out of tiny purse to mop up spilled water in one of the early skits, and then later, in a perceptive commentary on the way women are socialized to be near-constantly vigilant about the cleanliness of their space, Van Wieren picks up a bit of schmutz from the floor mid-dance. (I’m willing to bet there wasn’t a woman in the audience who didn’t nod in recognition at both of these gestures; I’m certainly guilty as charged). Another running gag takes up the mystery of how to properly fold a fitted sheet (hint: it requires either magic, or seduction). The tension between our “domestic” and our “non-domesticated” selves is also a repeated theme, captured perhaps most vividly in a dance in which Corning’s body seems split between a barefooted “madonna” and a high-heeled “whore,” weighed down by jangling pots, pans, and babies beneath a transparent hooped skirt. 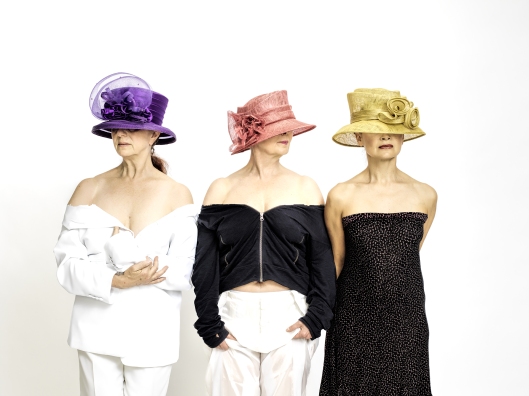 The costumes, designed by Corning and Lindsey Peck Scherloum, are stunning – all white, mostly transparent, and endlessly inventive in shape and texture. The monochrome white of the costumes beautifully supports the sublime-ridiculous mood of the danced vignettes. But with the final vignette – a presentation of Beckett’s one-act play Come and Go – we suddenly get color, as the performers come on in long coats of mustard, deep purple, and bright red, with elaborate matching hats covering all but their mouths. The visual image Corning achieves with the costuming of this final piece is striking; but even more remarkable is Corning’s simple but powerful staging. She has an intuitive understanding of how to fill out the pauses in Beckett’s work, and the result is a wry take on the way women use gossip and information to jostle for power among their frenemies. The final image of the night – of three women joined in the knowledge of having betrayed each other – feels like an apt, if bittersweet, coda to the evening’s reflections on the female experience.