In his Hamburg Dramaturgy, the 18th-century German playwright and critic Gotthold Ephraim Lessing claimed for theater, above all other arts, the capacity to arouse in an audience member a feeling that he termed Mitleid. That word, if you were to translate it literally, would be something like “suffering with”; Lessing theorized that drama achieved its greatest effect when spectators found themselves in a state of Mitleid with the character or characters in the play. The closest equivalent we have in English is probably “empathy” (although that’s far too modern a word for Lessing); other equivalents are “sympathy” or “compassion” (which is the term we used to translate Mitleid in our new translation of Lessing’s text). But there isn’t really a good English word to capture that sense of being with someone in their anguish and distress that the German term carries with it in its root of Leid.

Why am I talking about the translation of a German word in a post about Kinetic Theatre Company’s production of The Father? Well, because in fact, when I think about it, I can’t recall many experiences of theater in which I truly felt that I was “suffering with” a character in a play. I can think of instances where I felt sorry for a character (pity, compassion), or could imagine myself in their situation (empathy), or could identify with them on some level (sympathy). But truly suffer with them? That’s rare.

And that’s precisely the experience French playwright Florian Zeller offers in his masterfully constructed play The Father (the excellent translation is by Christopher Hampton). The central character – the father of the title – is Andre (the marvelous and heartbreaking Sam Tsoutsouvas), a retired engineer who suffers from dementia. He has an adult daughter, Anne (Catherine Gowl), and – at least as far as he knows – he lives in a large, beautifully appointed, immaculately clean apartment in Paris. At first, it seems that our glimpse into Andre’s condition will be mediated by Anne’s experience of coping with the symptoms of his dementia, that is, with his forgetfulness, his irritability, his hostile aggression toward the caregivers she employs, and his lack of understanding about what is happening to him.

But we quickly come to realize that our point of identification is not Anne; it’s Andre himself, and the playwright has contrived to structure his scenes so that Andre’s experience of reality is replicated in our experience of the play. In the first scene, Anne tells Andre that she is about to move to London with her new boyfriend; in the second, a man (Gregory Johnstone) comes into the room and patiently reintroduces himself to Andre as Anne’s husband of the past decade. In the next scene, a different woman (Lisa Ann Goldsmith) arrives and claims to be Anne, and when a confused Andre asks after the husband, she gently reminds him that she is not married. In later scenes, Anne and her husband Pierre (now played by a different actor, Darren Eliker) try to get Andre to accept a new caregiver, Laura (Erin Lindsey Krom). Andre likes Laura because she looks like his other daughter Elise, whom he thinks is travelling but who is in fact deceased. Imagine his distress when Laura returns to take care of him the following day and no longer looks anything at all like Elise. This type of switcheroo continues, scene after scene after scene. Not only do people get mixed up, but time does too – we see and experience (with Andre) events happening in one order, or on one time scale; but then other characters in the play gently contradict our experience of time, explaining that things have, in fact, been happening in a different order, or occurred longer ago than Andre (and we) believe they did.

You could imagine a play or film in which a group of characters conspire to screw with someone’s sanity in such a manner, as part of an elaborate and cruel practical joke. That’s also one way to figure what it must feel like to suffer from Alzheimer’s or dementia – it must feel as if the world is conspiring to undermine your understanding of reality at every turn, by fucking around with the cast of characters who populate your world and making hay with the order of events and the flow of time. And as Andre suffers from the confusion and bafflement produced by his dementia, we find ourselves sharing in his bewilderment and in his incapacity to distinguish memory from present reality. At any given moment, it’s unclear whether what we are observing on stage is actually happening or only playing out in Andre’s mind, as reality, memory, and hallucination collide before our eyes.

Zeller’s play also opens an empathic window into the emotional lability of a person with dementia. Most of us would become enraged, too, if some person we had never seen before walked into our home and insisted that they were the caregiver we had met just the day before.  We, too, might respond to the tenuousness of our hold on reality by perseverating irritatingly on some beloved comfort item – a watch, for example  – or by treating the family members who have the difficult task of caring for us with cruel dismissiveness. 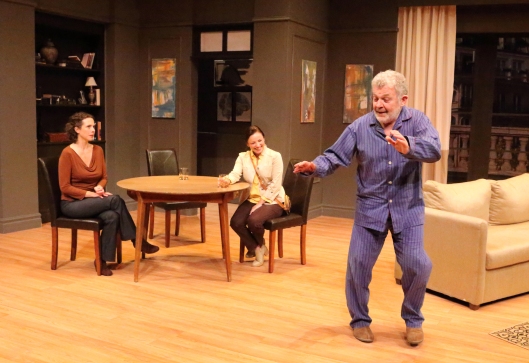 Johnmichael Bohach’s eloquent scenic design plays a prominent role in the storytelling. The apartment morphs and changes throughout the play, subtly at first but then – in parallel with Andre’s loss of self – gradually losing its familiar features and becoming another space entirely. Tellingly, the unpredictability of the environment is at odds with the efforts, on the part of caregivers, to impose structure and order on Andre’s life, as evidenced, for example, in repeated urgings along the lines of “let’s get dressed now.” The production makes clear just how nonsensical and baffling such attempts at order must seem to a person whose surroundings appear to be changing inexplicably around them.

The Father is a structurally and emotionally complicated play, but director Andrew Paul makes it look easy. He has taken an understated approach that works beautifully: many of the scenes feel as if the characters are walking on eggshells with held breath. This feels right both as a depiction of what it feels like to be a caregiver to a person with dementia, and as an imagining of what a person with dementia might feel as they navigate a world in which reality shuffles around them like a jigsaw puzzle with interchangeable pieces. We suffer with them all, and in so doing, gain a world of understanding and insight into a devastating condition.

1 thought on ““The Father” at Kinetic Theatre Company”